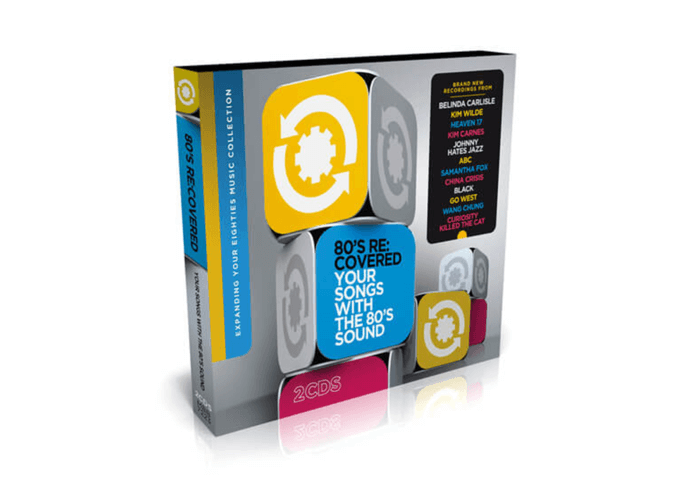 A special album that takes fans on a journey back to the future.

The decade of the 80 was key in the history of music. Not only did he leave behind an unforgettable catalog of songs, but it was an unforgettable time for the number of talented artists who were still active many years later.

Timeless artists who continued touring the world and recording new material. The fans were asking for it and once again, Music Brokers put together the dream team to bring us back music’s best decade. 80s Re-Covered is an extraordinary project in which 12 essential artists from the 80s (Kim Carnes, Curiosity Killed The Cat, Heaven 17, ABC, Black, Kim Wilde, etc.) accept the challenge of recording songs from other decades with the sound of the 80s. The result is an album with an incredible repertoire that also functions as a hidden gem from what was perhaps the most powerful era in the music industry.

The recordings on this album were created exclusively for this project, arranged and produced by a team that included Robin Millar (Sade, Fine Young Cannibals, Big Country, Eric Clapton and Sting among many others). 80s: Re-Covered is a massive and unique project, acclaimed and turned into a success by distributors and fans from all over the world. The project that led to the release of the album was spearheaded by Federico Scialabba of Music Brokers, the only Latin American multinational independent company, and the extraordinary Robin Millar, one of the most successful music producers in the world with more than 150 gold, silver and platinum records. and 55 million copies sold. Sade’s debut album Diamond Life is one of her major works and was selected as one of the top ten albums of the last 30 years at the 2011 Brit Awards.

On 80s: Re-Covered, Millar recalls: “Federico Scialabba told me that they had the idea of ​​making a record of 80s artists recording songs from before or after the 80s that had also been hits. The problem was that the artists and managers didn’t take a Latin American Indie company seriously, so they needed someone to act as a bridge between the Music Brokers and the artists. That was really my role in the beginning.” Thus, Robin Millar became one of the executive producers of the project and convinced several stars from the world of music to participate. And of course, he offered them all the resources to create new materials while promising to have a lot of fun in the process. “I guess for the first time in a long time these celebrities had someone they respected challenging them to do their best work,” Millar relates. Judging by the end result, the artists selected their songs wisely. For an artist, the chosen song involves emotional and very personal reasons. “They gave me a list of about 20 songs,” says ABC’s Martin Fry. “High And Dry jumped on me. I have always loved the song. It means a lot to me. It reminds me of a time when I was drinking too much and partying too much, and it also reminds me of the years after, when I sobered up. Life is good now and I feel at my creative peak.” In addition to the deeper meaning, Martin recalls the challenge it took to turn the song into an ABC signature track. “We tried to do it as a prequel. As if people heard Radiohead’s cover and thought they had covered that 80’s song! It has a fun, time-machine tone to it – a back-to-the-future vibe.”

Songs from 80s: Re-Covered retain their unique charm, yet sound like the original in the hands of the artists performing them. China Crisis’ version of Carole King’s “It’s Too Late” could articulate comfortably with everything they recorded on their first two albums. Belinda Carlisle turns CCR’s “Have You Ever Seen The Rain” into a pop anthem. Captain & Tennille’s soft pop classic “Love Will Keep Us Together” transforms into a disco beat at the hands of Kim Wilde. Each track on 80s: Re-Covered is an exploratory journey through time. “I can honestly say that all the artists and producers are very happy with everything we recorded and with the end result,” adds Robin Millar. “Personally, I think it’s some of the best work by these artists in a long time. They really managed to shine.” The album is made up of two CDs: the first contains 12 exclusive new versions of the original ’80s stars, while the second has extended remixes of each of those tracks.